How Crucial to Bible Numbers
is Pin-Pointing the Exact Exodus Date? 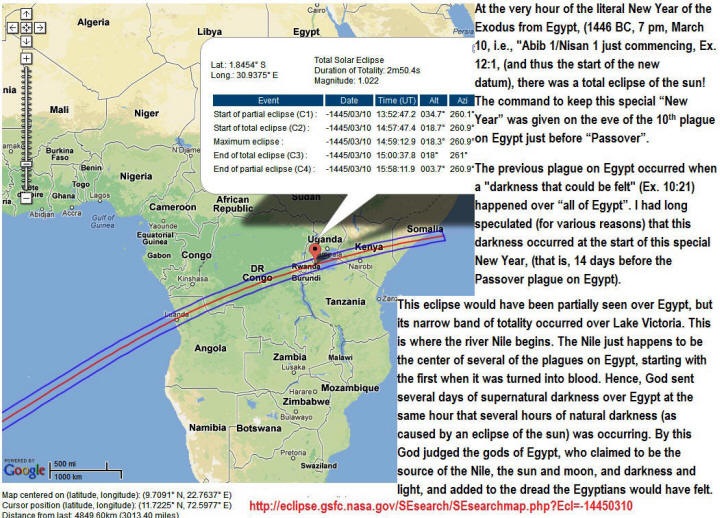 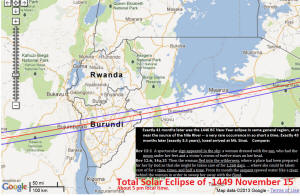 I discovered the above eclipse while working on the below automated calendar. Interestingly, 3.5 years earlier another total eclipse occurred in the same area. (See, Rev. 12.)

The date of the Exodus is hotly contested among students of chronology, for once this date is secured then all dates reaching back to the Creation can be ascertained. In my own study of bible numbers, I use the date that is recognized by the majority of modern bible-believing scholars (i.e., 1446 BC). But I hasten to add that for some of the patterns (using the numbers in the bible) this question is irrelevant because many of the patterns exist irregardless of their exact date in history. Many patterns are internally present within the text itself, as such they are not contingent upon establishing their exact dates in pre-Israelite history.

About the following chart:

To repeat: These patterns (and hundreds more like them) are unaffected by whether or not an exact date can be assigned them---they stand alone since they are based internally upon the bible's own chronology; they are true no matter where one assigns them in actual linear time. Surely, what these patterns mean are more important than the mere plotting of them down on some time-line! Nonetheless, I am personally confident that the majority view of the scholars is correct, that is, that the Exodus was in c. 1446 BC. And if indeed this date is correct, then we have an astounding fact before us---the patterns of the above chart happen to work flawlessly with this same date (of 1446 BC). The patterns not only continue uninterrupted, but indeed they blossom and converge at the birth of Christ. A remarkable coincidence indeed---if it is a coincidence!

Is the 1446 BC-Exodus date a fabrication to fit the said patterns?

It is reasonable to inquire as to whether or not the popular date of 1446 BC for the Exodus was simply a concoction by scholars to fit the bible numbers. However, the 1446 BC date was not chosen arbitrarily but was the consequence of first establishing the date for Solomon's temple as c. 966 BC, and then simply adding to it the 480 years of 1Kgs. 6:1---and this 966 BC date was not chosen arbitrarily, but because of empirical evidence only.

Moreover, most scholars reject out-of-hand the day-equals-a-year principle , thus they would not have been influenced by the bible numbers in ascertaining the Exodus date since they do not as much as believe in them (as I have here displayed them)! Interestingly, the day-for-year principle was the norm for centuries before us. However, bible students that lived during those centuries lacked the correct dates and thus they did not discover anything substantial in their exhausting studies. Ironically, while our generation possesses the correct dates indeed, yet they have generally forsaken the day-for-year principle and so have overlooked the patterns in the bible numbers! (By this, God "sealed up" the understanding of the numbers until our day.)

In conclusion then, even though the establishing of specific dates is of tremendous value in the study of the numbers, yet it is by no means a prerequisite for reaping its benefits. Many patterns exist internally within the bible itself unaffected by date setting, and are of great value in aiding biblical interpretation. Nevertheless, there are far-reaching benefits reaped by the establishing of exact dates. The patterns that result from them not only aid biblical interpretation, but also prove the reality of the Lord Jesus Christ to an unbelieving generation. For they prove beyond doubt that the Author of the Bible is ultimately God---for whereas men can devise a false genealogy that produces numeric patterns, but only God can etch complex numeric patterns into actual history.

The following patterns were ascertained using the 1446 BC Exodus date and represent but one bible-number pattern. Here, then, is a summary of the 360 "Bible-Prophecy-year" cycles that appear when calibrated to the 1446 BC date. The patterns produced not only vindicate bible chronology in general, but testify to the accuracy of the 1446 date specifically.

Also see, "Why scholars are right about 1446 BC as the Exodus"

.
How Israel became a nation in 1948 on the exact day predicted in the Bible!